The PHAT is an architecturally themed, ale infused journey that drinks in the rich history of the Atherton Tablelands and Cassowary Coast.

We celebrate the central role of the public house in country Queensland and their unique design aesthetic.

This epic day covers approximately 280km and climbs to an elevation of 830m above sea level offering glorious vistas and venerable establishments at every turn.

The procession of architectural marvels are punctuated by beautiful vistas and the sobering reminder of the cost of war at the Afghanistan Avenue of Honour in Yungaburra.

The PHAT is not suitable for children or those with an aversion to cold beer, pub lunches and good banter.

The tour is designed to be sold as a private charter for small groups of friends/colleagues etc thereby avoiding the need to share your good fortune with complete strangers.

The PHAT is the perfect antidote to the usual hinterland day tour as it is devoid of art galleries, craft boutiques, souvenir shops or devonshire teas 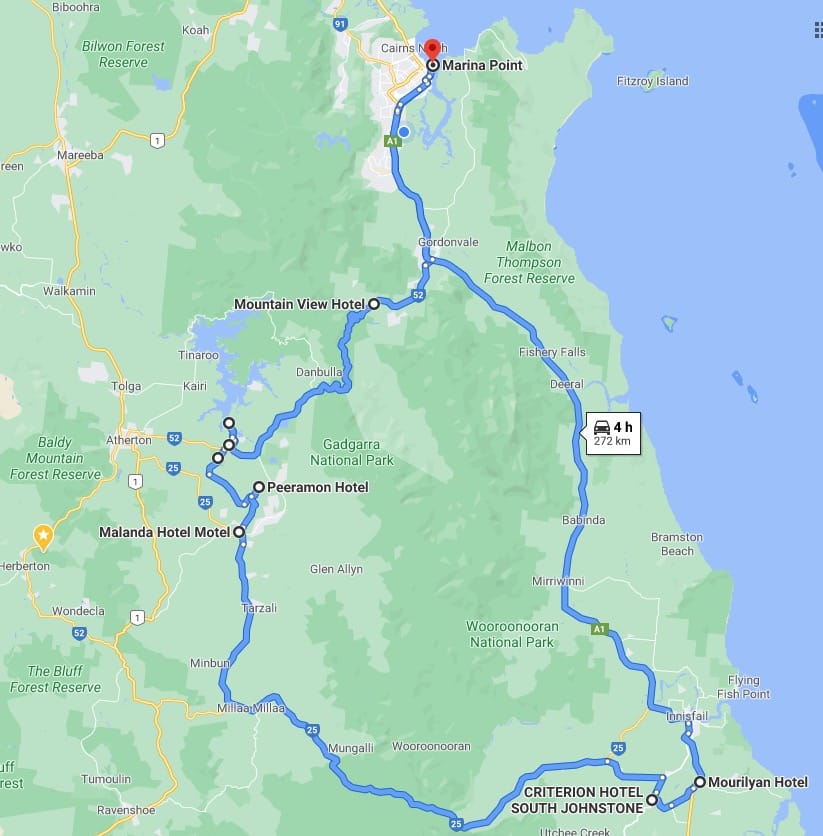 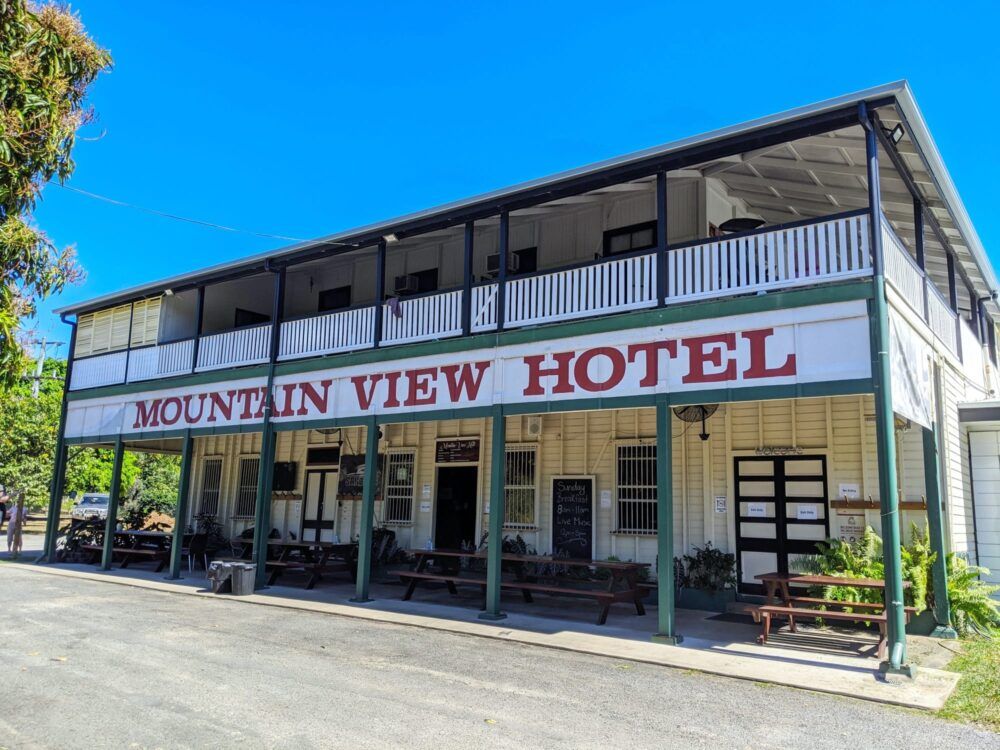 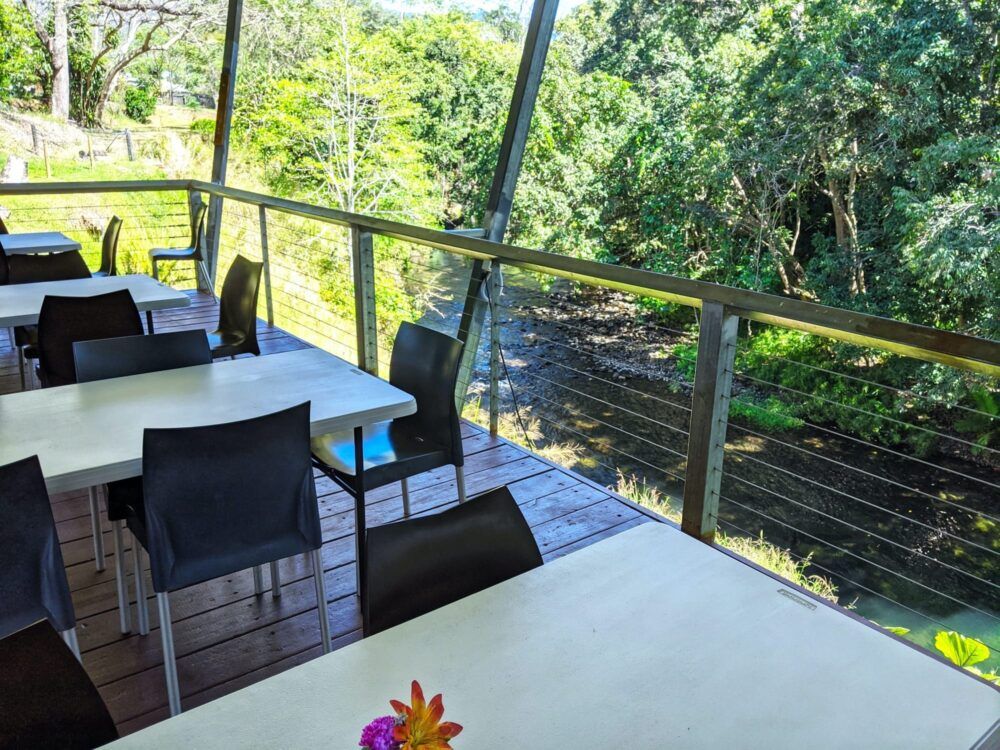 After leaving Cairns we head south through sugarcane country and up the Gillies Highway. Our first stop is the Mountain View Hotel which is located on the banks of the Mulgrave River and at the foot of the Gillies Range.

The Mountain View Hotel sits on the picturesque Mulgrave River and at the foot of the Gillies Ranges.

The hotel was established to take advantage of the Gillies Highway which was completed in 1926. This 19km stretch of winding road climbs 800 metres into the Atherton Tablelands and should not be attempted on a full stomach.

Once we are up and over the range and on the Atherton Tablelands or Cairns Highlands we will head for Lake Tinaroo. 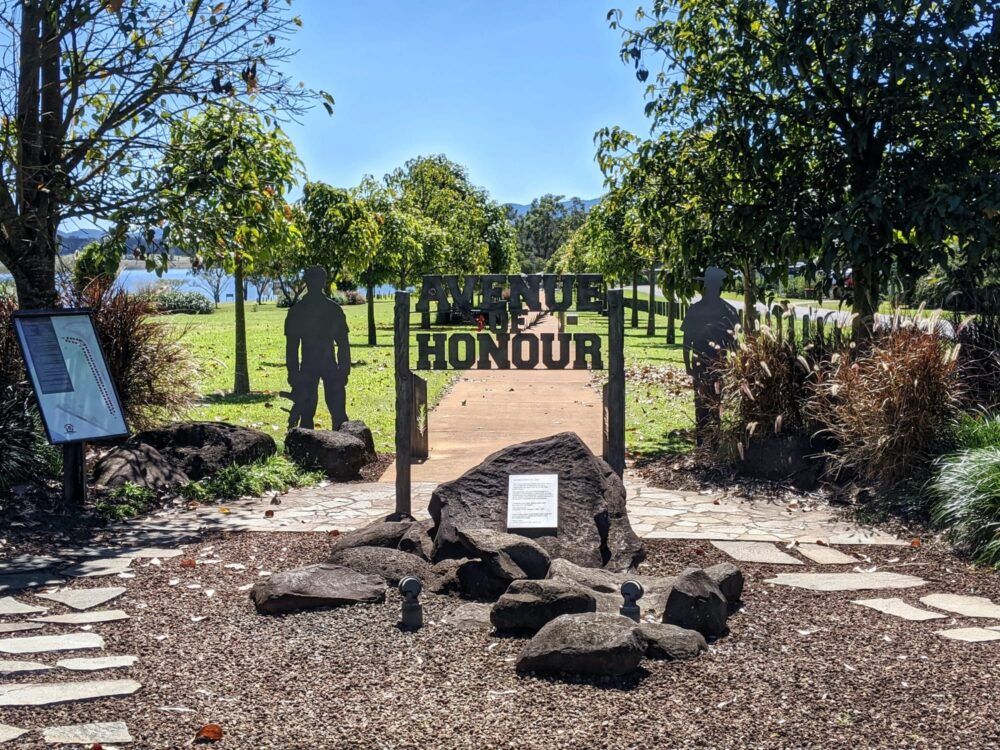 On the peaceful shores of Lake Tinaroo lies a sobering reminder of the cost of war. The Afghanistan Avenue of Honour was inspired by a Yungaburra family who lost their son in the conflict and wanted to commemorate his and other Australian troops’ sacrifice in what was our longest war. 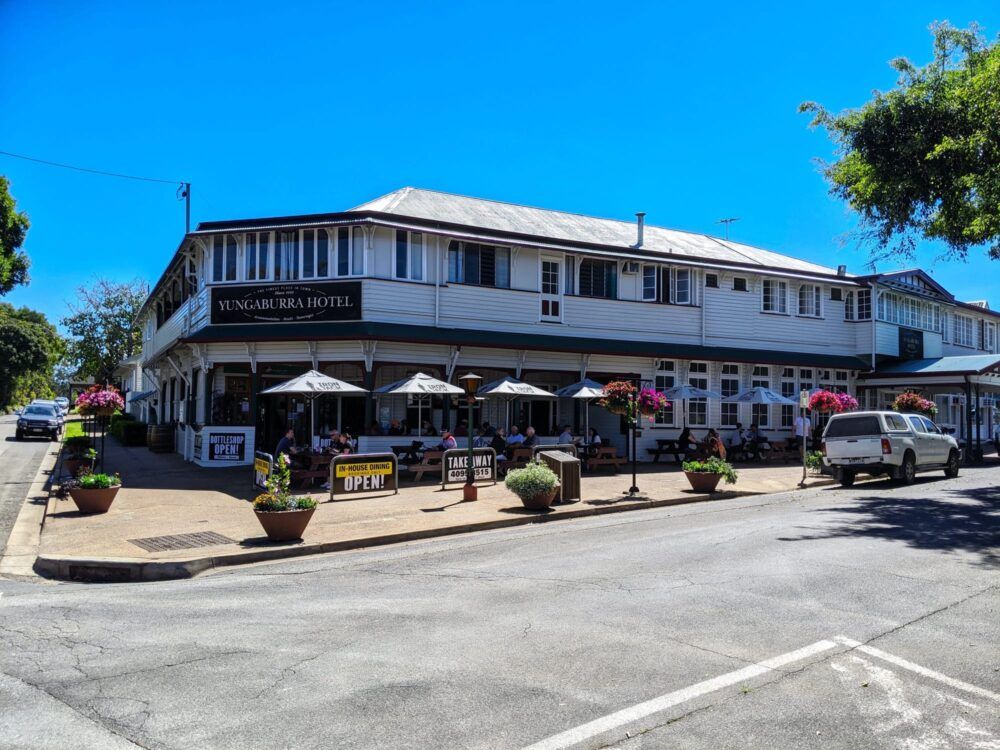 The small town of ​Yungaburra ​is as pretty as a postcard with the historic ​Yungaburra Hotel taking centre stage.

This grand wooden pub was built in 1910 when the railway came to town and was extended in 1926 in the Art Deco style. During World War Two it accommodated troops and may have sold them the odd schooner.

Today it is a popular stop for tourists and Cairns locals on day trips up to the Tablelands. 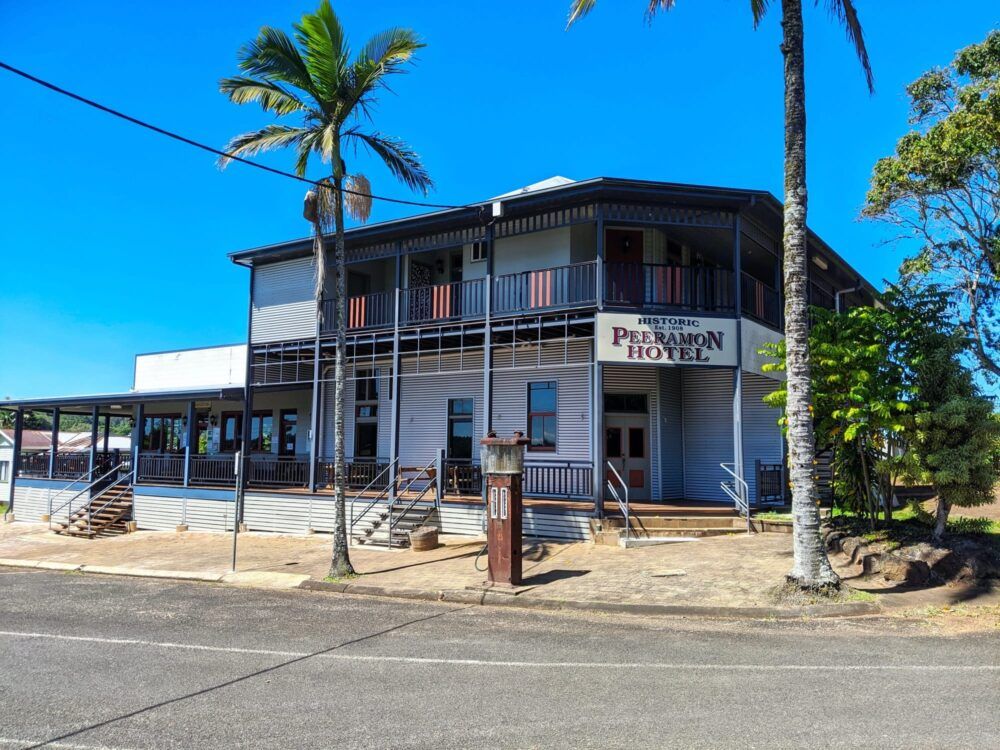 Peeramon is a tiny hamlet located between Yungaburra and Malanda. The Peeramon Hotel was built in 1911 to serve the local timber industry that was supplying the new railway.

The pub was badly damaged by Cyclone Larry in 2006 and has been slowly restored and refurbished. The outdoor dining deck is a great new addition as it affords a lovely vista of rolling hills and dairy farms.

From Peeramon we roll on a few kilometres to the diary town of Malanda. 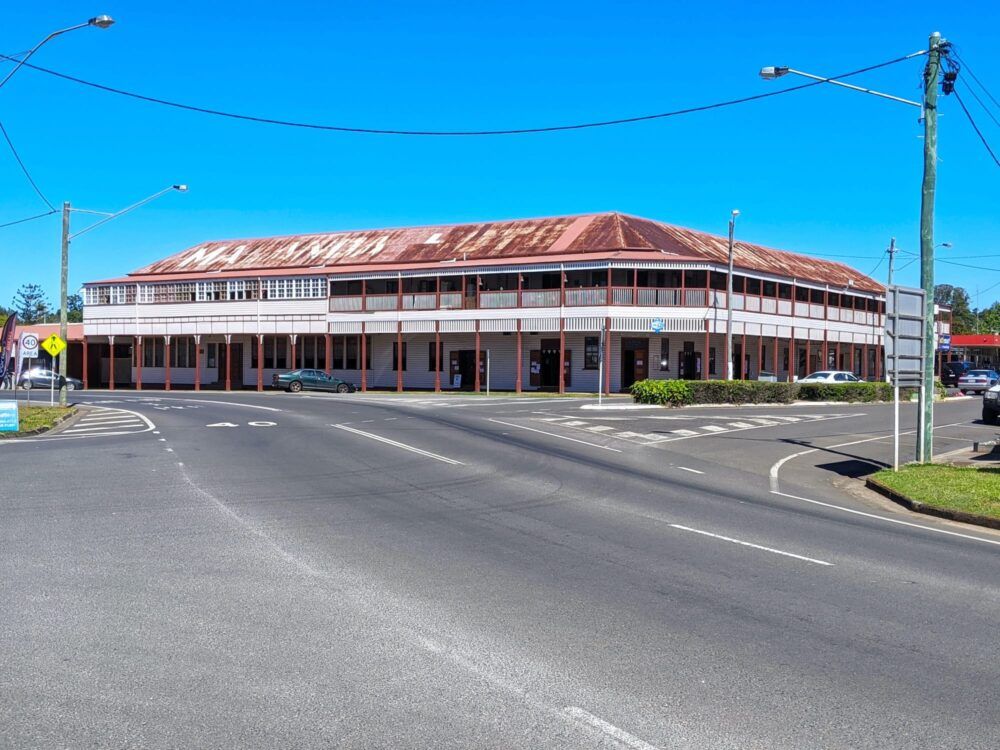 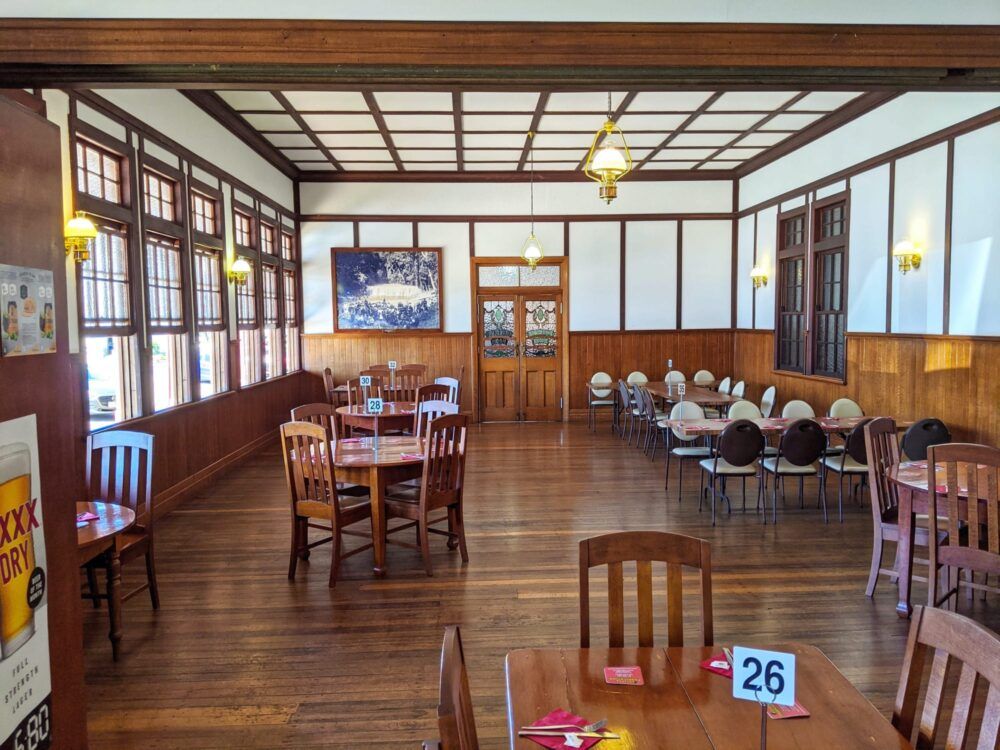 The town of Malanda is the centre of the ​Atherton Tablelands​ dairy industry and at its core is the grand ​Malanda Hotel​. This is Australia’s largest wooden pub, built in 1911 from local rainforest timber. It has several bars, a dining room and a large ballroom. This is our lunch stop, so please enjoy a hearty pub meal.

After lunch we have a long descent via the Palmerston Highway back down to the coastal flats and into sugarcane and banana country. This is a dry leg of some 80km. For those that fail to lapse into a post lunch coma you can enjoy the lush rainforest scenery of the Wooroonooran National Park. 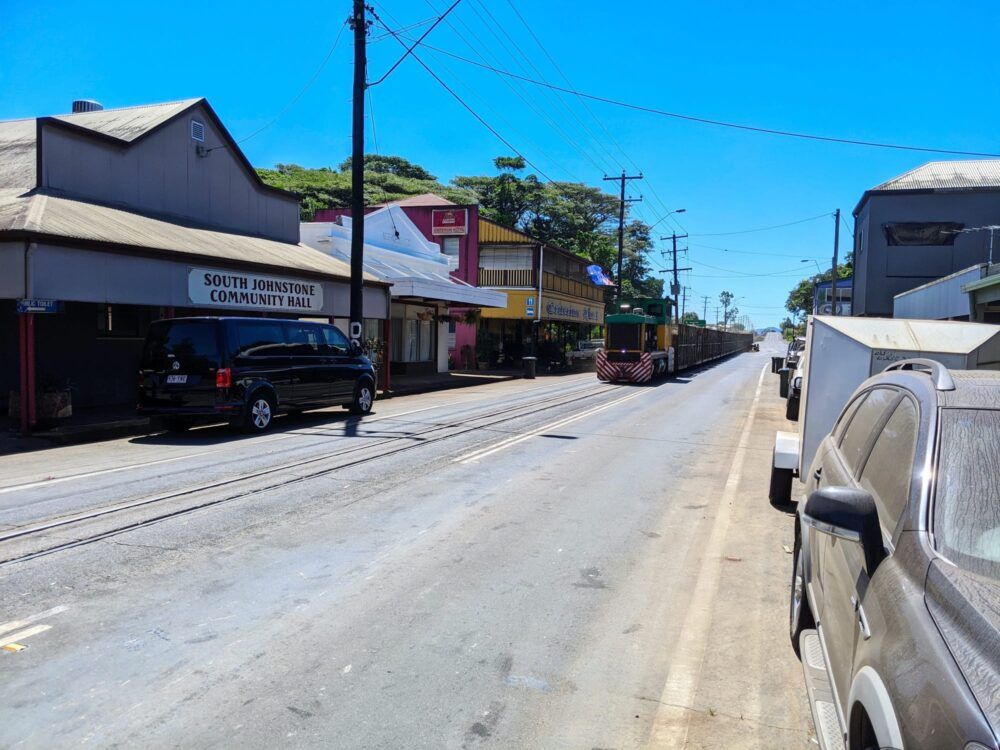 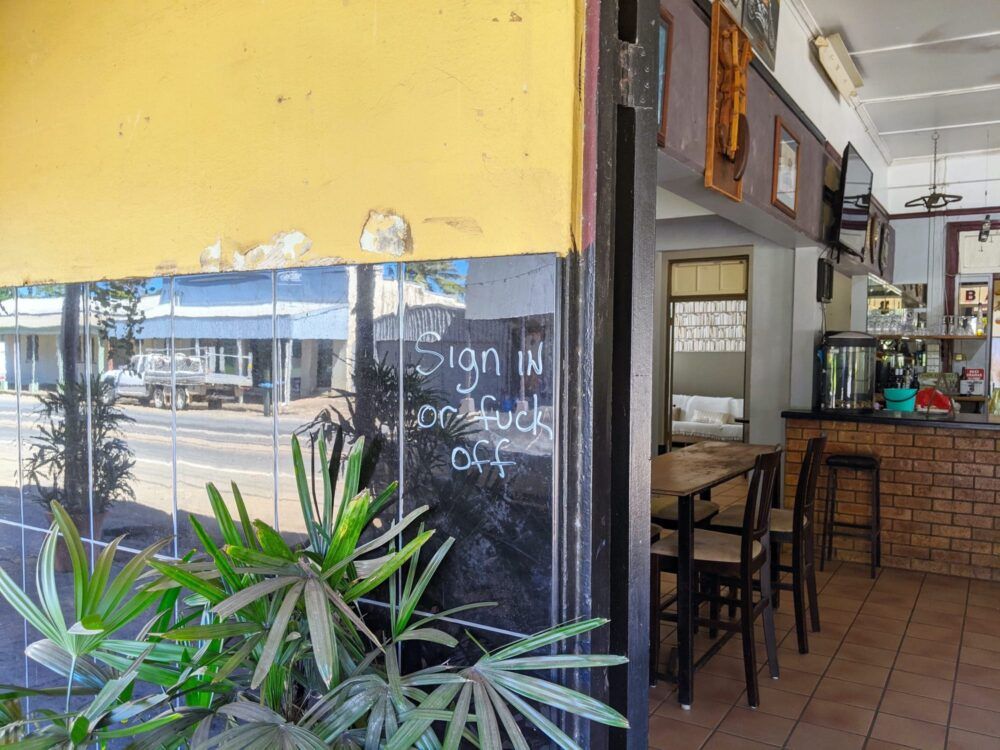 A warm welcome awaits you at the Criterion Hotel in the small sugar mill town of ​South Johnstone​ located on the scenic ​Canecutter Way​ is home to the ​Criterion Hotel,​ built in the 1930s.​ ​

The Criterion was built in the 1930s and has bit of a time warp feel to it. The sugar cane trains passing mere metres from the front door is a unique feature. 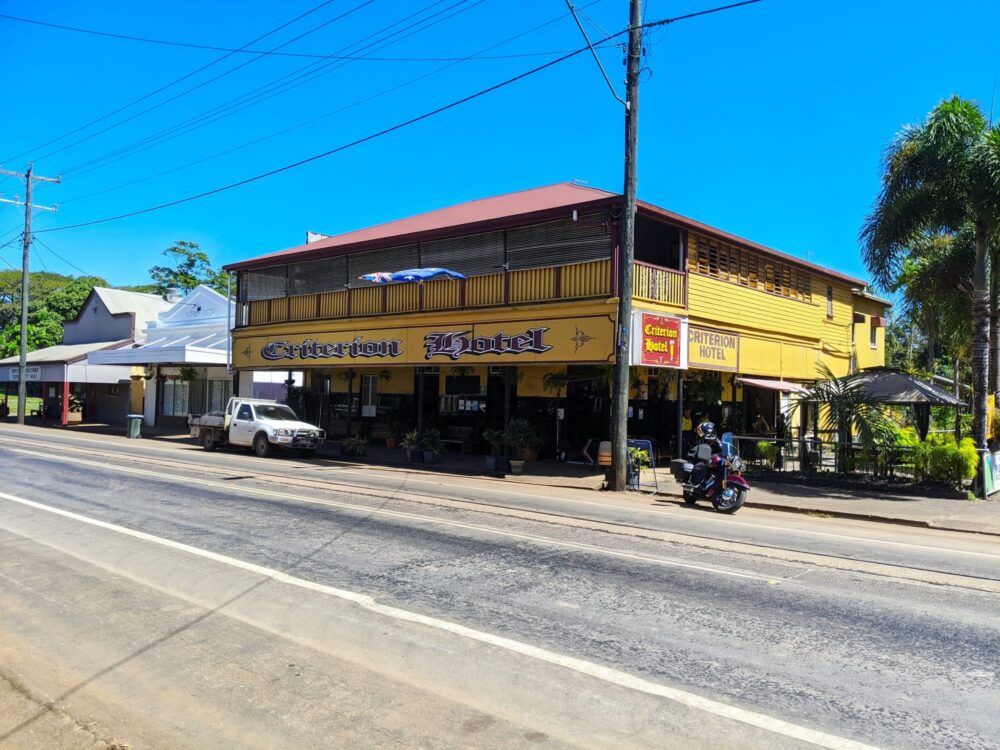 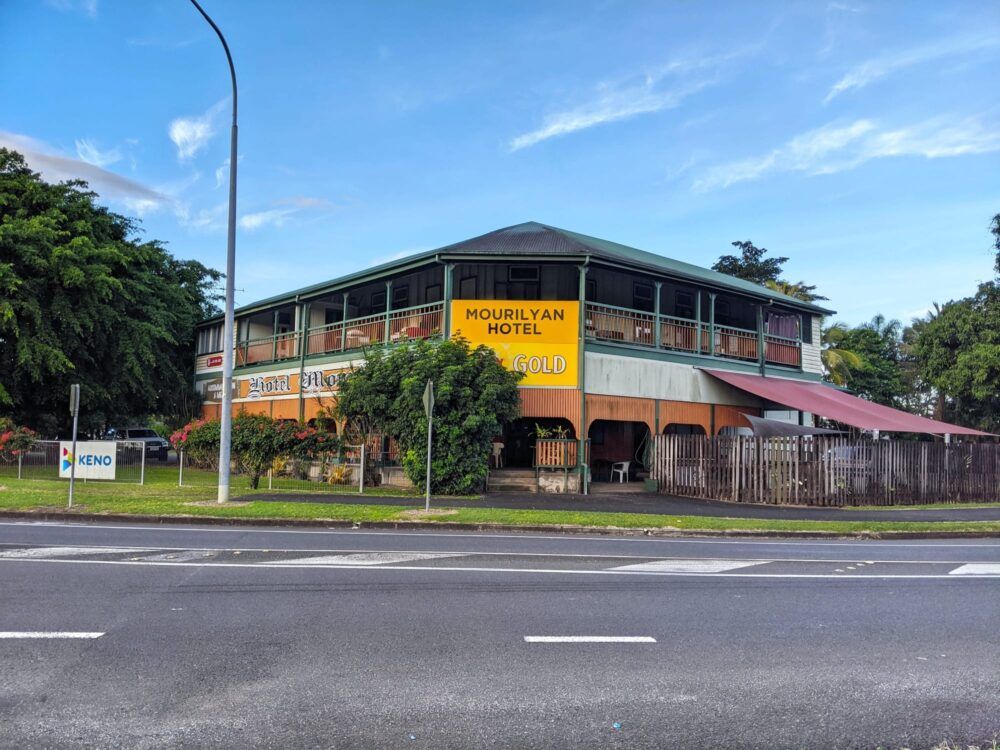 The Mourilyan district produces so much sugarcane that nearby Mourilyan Harbour has become a dedicated sugar export shipping terminal.

There is also some significant early 20th Century architecture in the form of the Mourilyan Hotel. 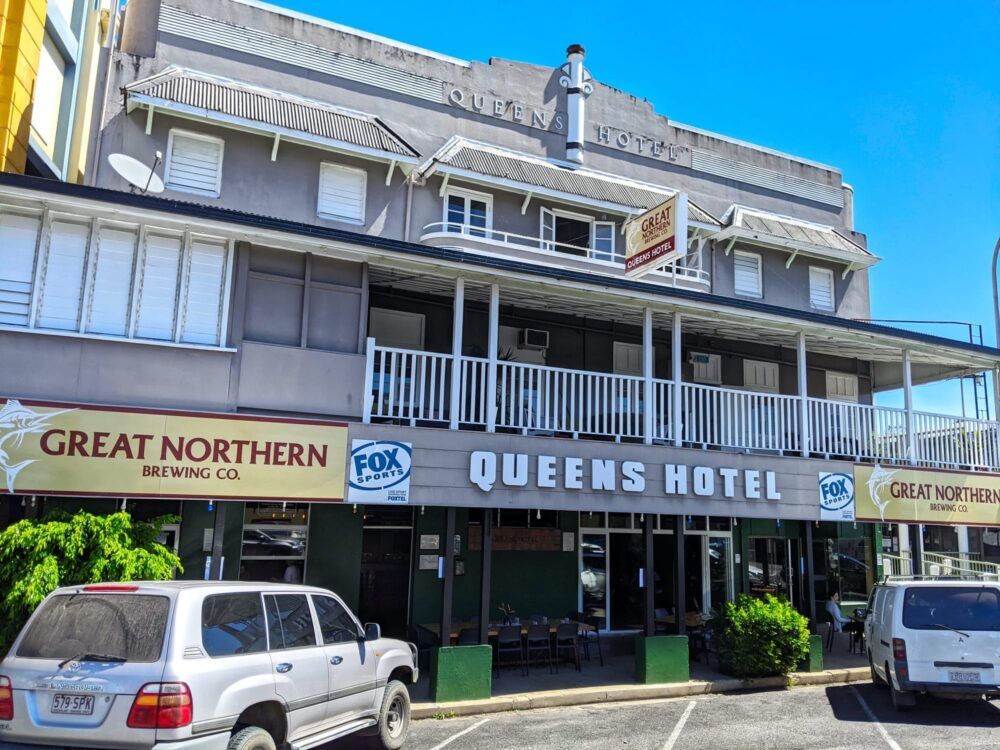 From Mourilyan we follow the Bruce Highway into Innisfail.

The large farming town of Innisfail is known for its bananas and sugar cane as well as its impressive collection of art deco style buildings from the 1930s. The Queens Hotel is a well preserved example of this style.

Admire the Queen’s geometric modernist facade over a cold schooner.

Fun fact: The town was originally named Geraldton, but was often confused with the town of the same name in Western Australia. It was renamed after the main sugarcane plantation in the area at the time which was called Innisfail by its Irish owner. 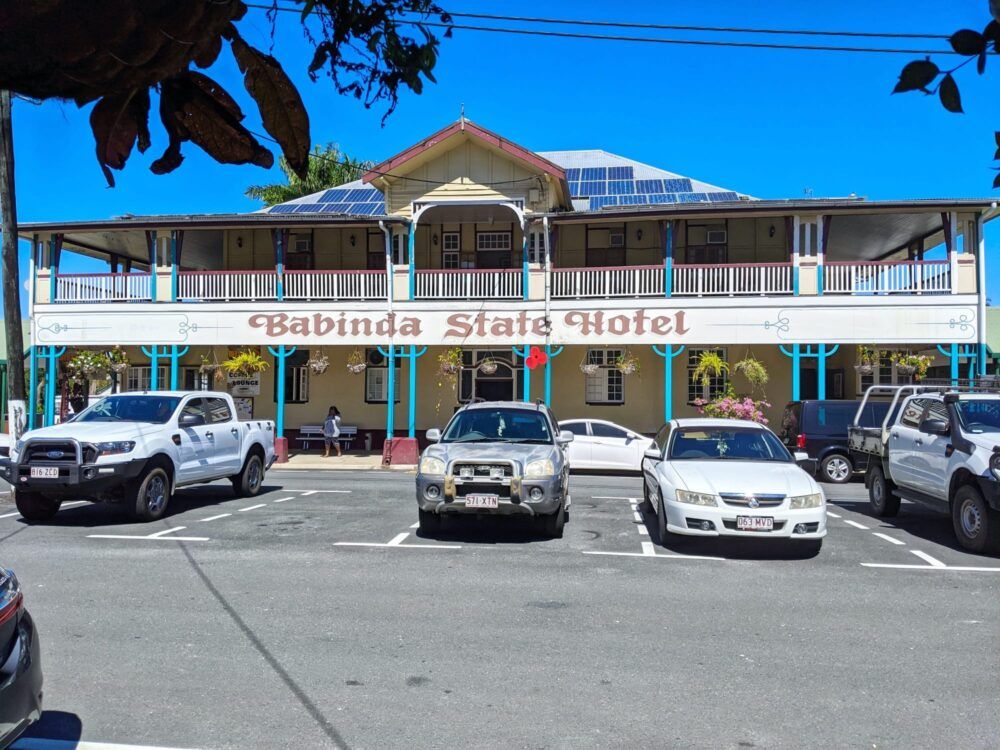 We farewell Innisfail and continue north on the Bruce Highway to the small town of Babinda.

You can whet your whistle in the wettest town in Australia. Babinda receives an average of 4279mm of rain each year. The Babinda State Hotel was built in 1917 by the Queensland Government (hence State) and has been the focal point of the small sugar town of Babinda for over 100 years.

After Babinda, we hit the home stretch back to Cairns and along the way, we have an optional stop at Fishery Falls. 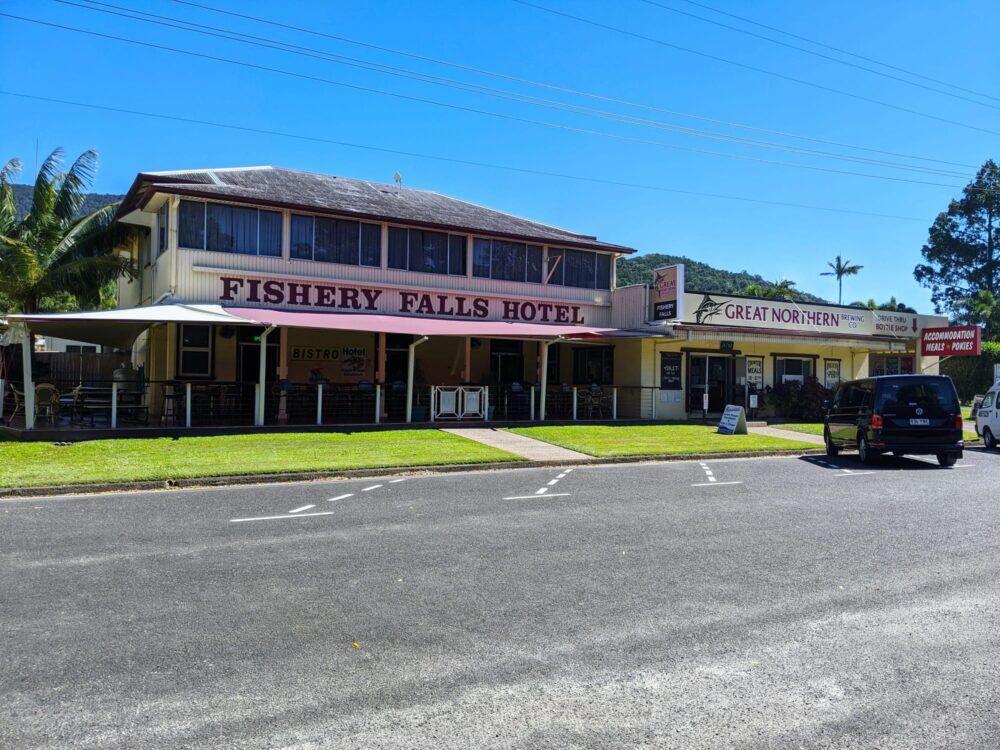 The Fishery Falls Hotel is a popular stop for travellers on the Bruce Highway, but is an optional stop for PHAT travellers as it is only 40km out of Cairns.

A limited selection of local beverages kept onboard for emergency purposes

All beverages on premise – these must be purchased by participants

Admission to attractions where applicable

Food other than lunch

Most public scheduled day tours out of Cairns of a similar duration cost around $200 per person.

Payment must be made in advance by EFT

The PHAT is only available on Saturday and Sunday until the end of 2020 after which we hope it can be offered 7 days per week.

Booking in advance – preferably three (3) days before hand. We will require all participants to fill out a brief online questionnaire in advance.

What time is pick up?
It depends where in Greater Cairns you need to be picked up. We aim to clear Cairns CBD by 0930 to make our first stop by opening time.
Where do we get picked up from?
Basically we can pick you up from anywhere within the greater Cairns area and even from Port Douglas (extra cost). We prefer for you to gather in one pick up location.
How much driving is there?
The route is approximately 280km of sealed road and includes at least ten stops.
What days does the PHAT run?
The PHAT can run any day of the week, year round except for Christmas Day, Boxing Day, New Years Day and Good Friday. Opening hours for some establishments may be reduced due to COVID which will entail changes to the itinerary.
What is a Private Charter?
This is when a group books the vehicle and driver for a set price and has the ability to modify the route or add or delete stops as desired. This is a great alternative to many seat in coach public day tour options that have a fixed itinerary.
Is this a Pub Crawl?
The PHAT is a historical and architectural journey through the Cairns Hinterlands as interpreted through the lens of the Public House as a societal construct. The consumption of alcohol is neither compulsory nor integral to the enjoyment of the experience, but is however recommended.
Can I choose the music?
You may avail yourself of the PHATMobile’s stereo via Bluetooth to play whichever crappy Spotify playlist you desire.
Is lunch included?
Lunch in the grand dining room of the Malanda Hotel is included. A menu will be provided in the bus and we will pre order to save time. Choose from the wide variety of Parmys on offer.
What should I wear?
The bare minimum of clothing and footwear so as to allow entry to a public house in Queensland. Should you forget to wear a shirt, we are happy to sell you a branded PHAT T-shirt.
Is the PHAT wheelchair accessible?
Alas, the PHATMobile is not equipped with wheelchair facilities, but we could hire a van with a wheelchair lift on a one-off basis for a small extra charge.
Is there space in the vehicle for luggage?
The PHATMobile has ample cargo space if you have checked out of your accommodation and need to bring your luggage with you.
What are your COVID precautions?
We thoroughly clean and disinfect the PHATMobile before and after each tour and we will check everyone’s temperature upon pick up. Complimentary shots of bleach will also be offered (kidding).
I get car sick - Is this a problem?
Mostly for the person sitting next to you. The Gillies Highway is the very definition of a winding hill climb which is why we get it out of the way early on. Coming down via the straighter, gentler Palmerston Highway after lunch is generally fine for most people.
Can we swim anywhere?
It is possible to stop for a quick swim at Malanda Falls by prior arrangement.
Previous
Next
Menu